How to stake NEAR

- Why staking NEAR is better than discovering Bitcoin
- How to stake NEAR and get maximum reward
- Staking NEAR: a complete guide
- Staking NEAR: everything you always wanted to know
- Staking: is future NEAR or HERE?

Staking in crypto is similar to how you would deposit your money for others, like banks, to play with, so you can get a percentage of their profits. There are significant differences (like with staking the other persons don’t have access to your funds, which is one of the reasons why it’s much, much cooler to go crypto ), but you essentially lock up your money and receive passive income.

Staking is a tempting offer if we’re talking cryptocurrencies. Why?

It’s our duty to warn you: banks go poof, but so do centralized exchanges, and even DeFi, so you should probably choose someone reputable to do business with.

So the question is — as long as you’re careful why wouldn’t you stake? But there is a catch: staking is an attractive option at first (minimum effort, and, if you find a good platform, maximum reward), but it’s not as easy as it looks:

“Staking allows token holders to earn a passive income simply for keeping cryptocurrency in their wallet. But becoming a validator yourself is not an easy task (a validator is a node that does the work of checking the integrity of and including new transactions in a block). This requires extensive experience in developing secure IT systems and knowledge in the field of cryptography. Validators must ensure the security and stability of the network, on which the staking profitability depends.

Delegators trust them with their coins: holders delegate coins to… to the blockchain and/or validating their correctness thus ensuring the security of the network. For doing this kind of work validators get rewarded with a portion of block incentives in proportion to the number of coins delegated to them. Validators, in turn, charge a commission for their services but allow those who delegate their tokens to stay passive and just receive income. This is an important aspect of staking: for everything to go according to plan, you need to choose a reliable staking provider with a proven track record that the community can trust (there are several criteria to choosing validators).”

Should you stake in NEAR?

So you want to stake NEAR. Congratulations! You’ve made a wise choice.

Here are a few reasons why you’ve made the right choice by deciding to stake NEAR: (TLDR)

Could you buy low and watch the price rise by an order of magnitude every month? For that to happen, a token (like BTC) needs to have some breakthrough technology behind it. Here’s what NEAR has to offer:

So now you know you’re staking the right coin let’s see how to actually do it.

In fact, staking NEAR is covered in detail in this Everstake article here (stay with us), but if you want a quick-and-sassy version, here’s how:

(optional) choose a Ledger Wallet to secure your account but if you don’t mind getting hacked use 2-factor identification in the form of your email address and/or phone number.

5. Write down a seed phrase and keep it somewhere safe (like rolled up inside a bed leg or inside a safe).

6. Deposit at least 3 NEAR tokens to the address provided

7. Your wallet is ready to use. You may be familiar with Argent, Metamask, or a Binance or Huobi account with an in-built wallet. This crypto wallet works the same way except at centralized exchanges you’re giving up control of your private keys, which is not recommended. 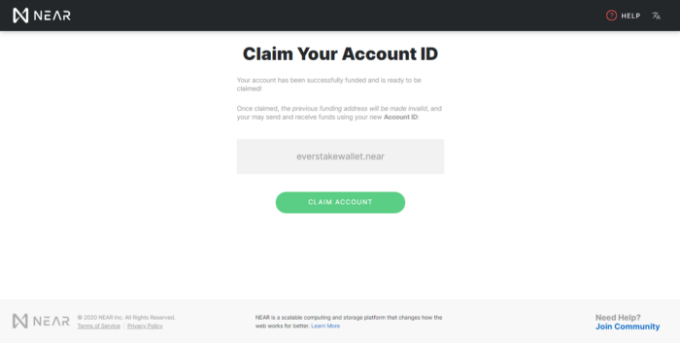 9. Go to the Home Page and open Staking

10. Choose a validator with whom you’ll stake your coins to get your reward. Now, be careful here. Validators can take you for a ride, for example, by sending you smaller rewards, disconnecting from the network, or going rogue and sabotaging your rewards.

For that reason it’s important to select trusted validators with a good reputation who employ a team of professionals who have earned a name for themselves in this business, ensuring you won’t be cheated.

“Everstake is a development team with many years of experience in fintech, economics, banking, blockchain and many others.”

Now, the name speaks for itself: it wouldn’t make any sense for Everstake to risk their hard-earned reputation: they are successful at making enough money through integrity, stunningly fast growth and insanely hard work.

a) Everstake’s team dedicates their resources to making sure a validator’s work is always stable and meticulously assessing validators before launch.

b) Everstake is constantly developing their high-performance nodes, providing staking tools that will make processes colossally more effective with less resource expenditure, supports users in real-time, has a terrific reputation and features complete transparency (the fact that validators produce blocks effectively can be checked anytime).

We make staking convenient and profitable, and also take care of the security of token holders who have joined us. Here are some numbers and facts to support this:

Our clients and partners entrusted us with $ 985.5 million of crypto assets.

More than $ 960 thousand were paid to the stakers who joined us for the entire period of work.

More than 55 million blocks were produced by our validators.”

11. Now that you know how to choose a validator securely, you can choose your validator’s name on the list (for example, type Everstake (everstake.poolv1.near) or choose your own but DYOR!) And check that you agree with the fee size. 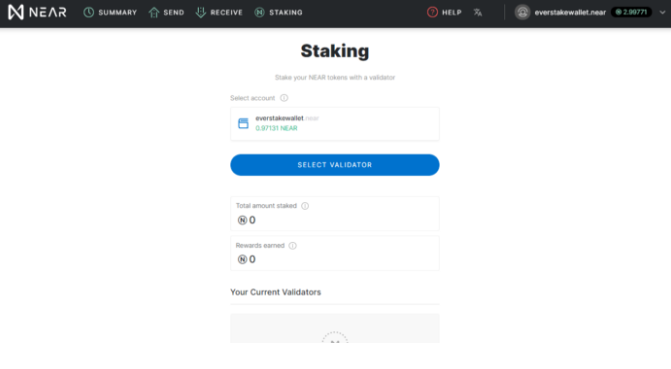 After the transaction has been verified you’ll see this window: 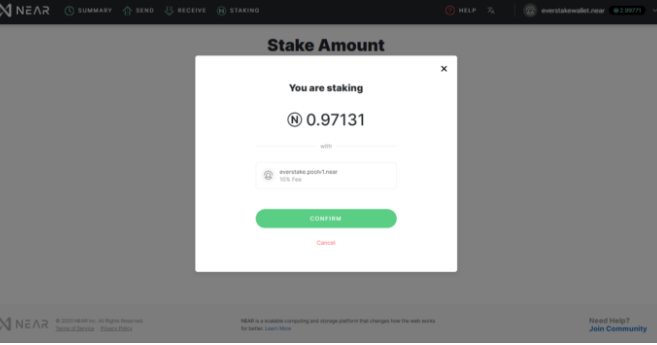 Go back to the dashboard to check your rewards.

You can withdraw your rewards as soon as the “withdraw” option is available. You’ll need to wait a certain amount of time for security reasons before withdrawing (approximately 48 hours).

You have valiantly fought the unknown, dizzying terminology, and bizarre mechanisms to complete this level!

Kow-tow from us for your discipline and dedication, along with a bonus level you just unlocked where we explain (a little) about in-depth processes of staking in case you have any questions left. Also attached is a link to the Whitepaper if you’re really determined, you stone-face God.

Think of it as a reward for taking your time reading this article (which, unlike your coins, you will never get back) so you can look cool at DEF Con 28 (not).

How does staking work in-depth?

This section is for cyber-ninjas only. You have been warned.

I’m told PoS is less decentralized. Is that true?

In fact, the original design by Satoshi meant one CPU equalled one vote. That way all users were equal. This was in part what made blockchains great. Then centralization happened.

One sad example of the rich getting richer is ASICs: those with enough money to buy more hardware get more rewards while an everyday person can’t really afford one.

Proof of Work, however, is also a move toward centralization. At the moment users pool together to get better rewards. Several large pools rule more than half of all the system, meaning that if they were to unite, their management would be able to take over. Check out the 51% attack (we warned you things would get heavy) and, just in case, God keys.

It’s actually possible to solve this problem with the help of the NEAR protocol:

“To address these concerns NEAR uses a staking mechanism called “Thresholded Proof of Stake” which is specifically designed to be both deterministic and broadly fair so it doesn’t incentivize pooling of large validators and it encourages broad participation from nodes.”

Won’t the rich get richer because only the rich are selected to be validators?

Actually, becoming a validator does require having capital (the more the better), but when a validator is chosen, that’s not the only parameter. Also taken into consideration are the values like a random number generator, the age of coins a validator has, and so on.

Hey, you’re awake! This actually is a mechanism designed to prevent fraud: players need to put their funds in escrow so that if they cheat their funds get slashed.

“In order to ensure that the operators of nodes — who are anonymous and potentially even malicious — run the node with good behavior, they participate in a staking process called “Proof of Stake”. In this process, they willingly put a portion of value at risk as a sort of deposit which they will forfeit if it is proven that they have operated improperly.”

As long as they stand to lose more than they gain as a result of fraudulent actions, there’s no point in cheating.

But could they cheat their way to more than they risk? This is one of the main pain points of the PoS system. Try to analyze the system with the industry legend Andreas Antonopoulos and decide for yourself.

Everstake is one of the few validators that received NEAR foundation’s delegation to support protocol decentralization: https://near.org/blog/how-the-near-foundation-is-supporting-network-decentralization/