Introducing Casper Network – an Optimized Blockchain for Business and Developers

CasperLabs has developed an open platform on its own blockchain optimized for enterprises and developers. Casper’s developers launched the test network back in 2020, and in the first quarter of 2021, the launch of the main network and the public sale of CSPR tokens are happening. We will describe to you what Casper Network is, what are the features of the platform and how the platform's tokenomics is set up.

Casper Network is the first blockchain that works on the Proof-of-Stake consensus mechanism, developed based on CBC specifications that were partially designed by Ethereum developers. An original CBC specification opens up opportunities for creating a new economy and allows you to tokenize almost any asset.

The goal of the project is to accelerate the integration of blockchain technology into the business processes of companies around the world. Users will receive a fast, scalable and productive platform to interact with business, and developers can develop efficient decentralized applications based on the Casper network.

In September 2019, CasperLabs held a private round of CSPR token sales, which was attended by well-known companies and hedge funds in the crypto industry: Consensus Capital, Axiom Capital, MW Partners and others. During the private token sale, CasperLabs raised $14.5 million.

The purpose of the sales rounds was to raise funds for the development of the Casper mainnet, which was scheduled to launch on March 31st, 2021, at 15:00 UTC, and was accompanied by a public token sale on the CoinList exchange, in which any user could participate who passed KYC, other than US residents in accordance with the provisions of federal securities laws. Here’s more about CSPR and its token sale in the section on Casper Network tokenomics.

According to the roadmap, CasperLabs successfully completed two private token sales, launched and tested a testnet, and completed a security audit conducted by Trail of Bits, a pioneer in security research for companies and software products.

Currently, the Casper Network team is focused on the public sale of CSPR tokens and the launch of the mainnet, the success of which will determine the course for further work. Once the main network is stable, companies and developers will be able to fully utilize the functionality of the network.

Let’s try to figure out what makes Casper so special. We have already talked about the original CBC-Casper (specification Casper Correct-by-Construction) underlying the platform's blockchain. This specification provides flexibility for the Casper consensus protocols, which allows adjusting the blocking time of tokens depending on network conditions and guarantees the irreversibility of processes. CBC-Casper makes blockchain processes deterministic, not probabilistic.

Casper is focused on the needs of companies

Companies can create their own blockchain applications and choose between public and private blockchains. They determine how to manage applications’ privacy and set permissions for their use without compromising security and performance.

The CasperLabs team has developed a new concept of “future-proof”, which builds on the flexibility of the Casper Network blockchain to adapt to the changing needs of businesses and developers. Casper is based on updatable smart contracts, which will allow improving applications in the future, based on the individual preferences of developers. And the predictable network charge (gas) ensures the stable operation of the network even under high load.

For developers with little experience in the crypto industry, Casper provides WebAssembly tools to help accelerate the development of Web 3.0 applications.

Sharding is a new concept adhered to by blockchain developers when building scalable decentralized platforms. This technology is being implemented in next-generation blockchains such as ETH 2.0 and Free TON.

Developers can already create productive blockchain applications based on smart contracts. The Casper team provides developers with the necessary documentation for an easy start.

About the Casper team

A team of researchers and entrepreneurs is working on the project, striving to create a flexible and functional solution based on blockchain and Web 3.0 principles, so that decentralized applications can be adapted to changing market conditions.

Mrinal Manohar is the CEO of CasperLabs, who previously worked for such large companies as Microsoft, Bain and Bain Capital. Mrinal Manohar ran a $ 1 billion hedge fund and is an early investor in Ethereum.

Medha Parlikar, the CTO, is a leader in product development with years of experience at Adobe, Omniture, MP3.com and others.

Cliff Sarkin, COO is the Former VP of Business Development at DNA.Fund, one of the leading crypto funds. He has two graduate degrees: a Bachelor's degree from the University of California and a Juris Doctor from Harvard Law School.

Daniel Marfurt, CFO is a specialist with many years of experience in finance and management in the field of fintech. Previously, Daniel was the head of Status.im with a market capitalization of $ 100 million. 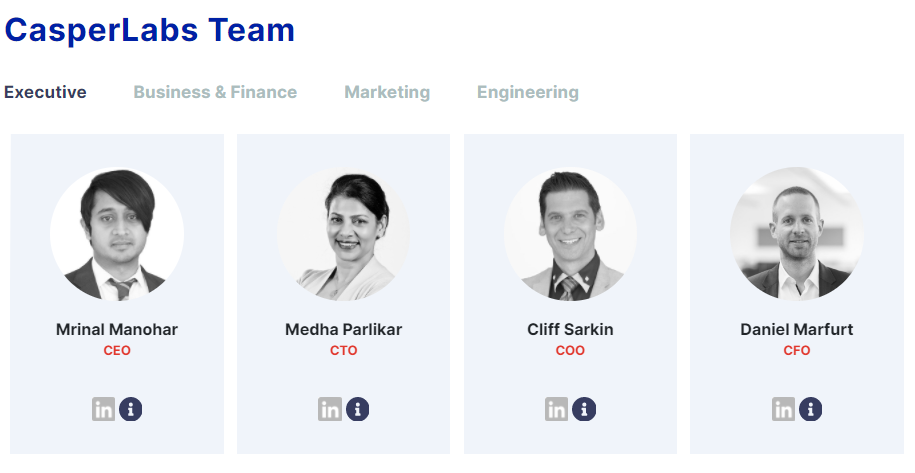 Casper partners with well-known blockchain projects such as BitGo, Chainlink, Huobi Global, Metis and others. 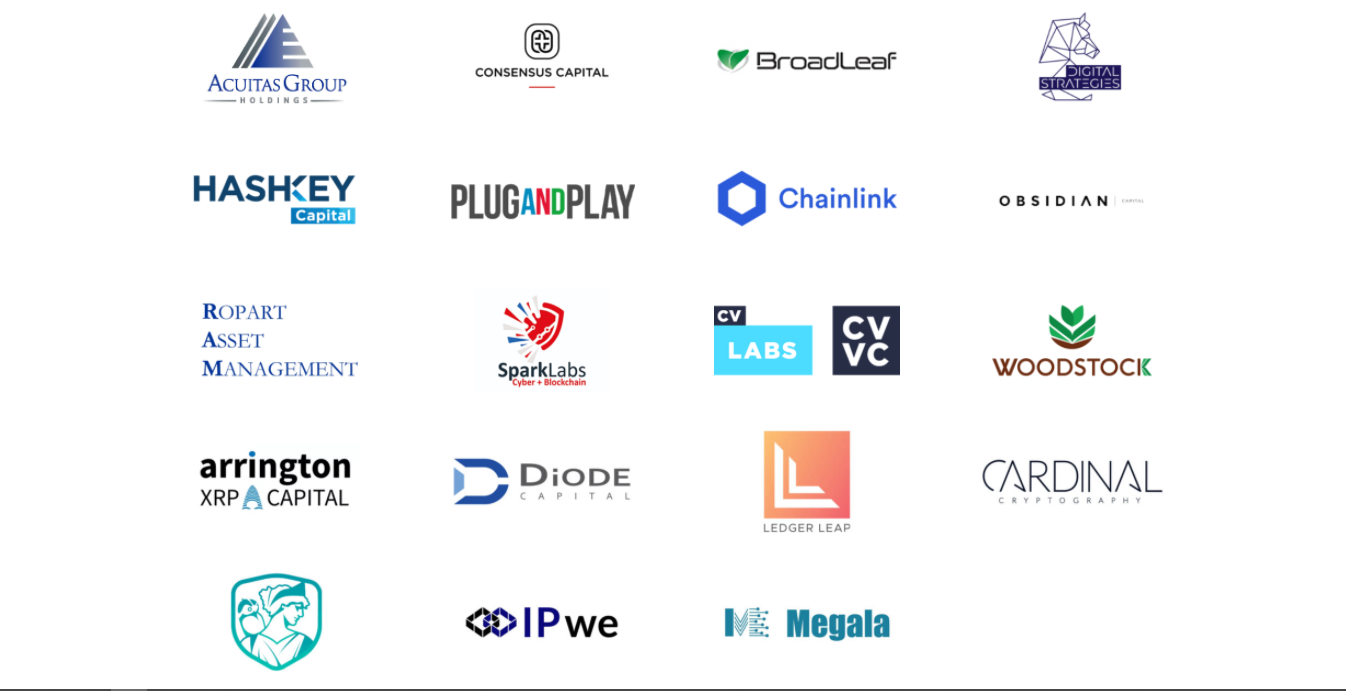 The Casper network consists of validators who stake CSPR tokens and participate in the development of the network, receiving rewards for their contribution. CSPR is the proprietary and main token of the Casper Network blockchain. The public sale of CSPR has successfully taken place from March 23 to March 28 on CoinList crypto exchange.

For investors, CoinList offered initially three options for buying tokens, depending on the date and amount of investment. Small private investors had the opportunity to purchase CSPR at the lowest price (March 23), but the lock-up period for this option is longer – at least 12 months after the sale is completed. Only after this time has elapsed will the investors be able to use the tokens at their own discretion. See the table below for the full conditions of participation in the public sale of CSPR. 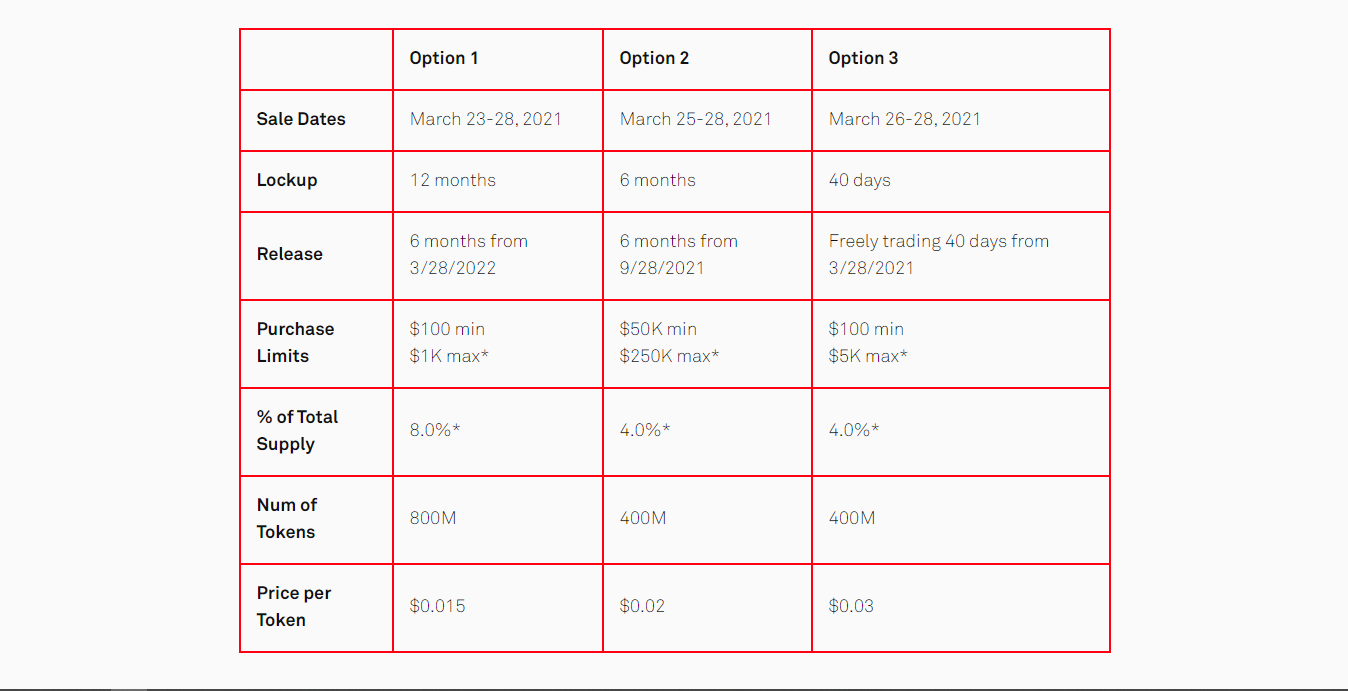 At the moment, the Option 4 of the token sale has been announced by the Casper team. It is planned to be held in the first week of April. An additional 1% (100m) of token supply will be distributed to the community. Each successful participant will be able to purchase $100 of CSPR ($0.015 per token with a 12-month lockup followed by a 6-month vest/release).

This will allow an additional 15,000 community members to purchase CSPR. The token sale will be available only to individuals who had already registered and been KYC verified for the sale but were not able to successfully participate in Options 1, 2, or 3. Complete details will be shortly announced by CoinList.

Companies and developers create flexible and scalable applications for a wide range of uses. The Casper network is made up of members, each with their own role.

They create blockchain applications that the entire Casper community uses. Developers can provide services by charging a fee in CSPR tokens and tokenize their own assets.

Validators generate new blocks and ensure network security by staking tokens and receiving rewards for processing all transactions in the Casper network. Validators form stake pools, in which tokens are blocked during the staking period and for some time after, which limits the offer.

Wallet Providers work on developing applications for storing and performing transactions with CSPR tokens. In the future, they will be able to develop services for users to participate in staking and delegate their tokens to validators.

Partners can use Casper-based solutions to run their own protocols enhancing their performance.

Customers will be able to use applications created on the Casper Network blockchain and get access to financial services by paying a commission for transactions on the network.

Some of the companies around are already using the Casper network to tokenize assets. Let's pay closer attention to one of them and discover how the company uses blockchain for its business.

Everstake is one of the Casper validators that participated in the first round of Casper private token sales in October 2020. After the mainnet launch and the delegating process setup, Casper token holders and institutional investors will be able to delegate their tokens to the Everstake validator pool. The rewards can vary from 5% to 20% per annum depending on the size of the staking pool (the exact amount of rewards will be indicated after the launch and testing of the mainnet economy).

Everstake has already successfully participated in a dry run, in preparation for the mainnet launch on March 30th.

Everstake is a large staking provider run by an experienced blockchain, IT and fintech development team. The team is actively involved in various crypto projects and develops solutions to improve the work with PoS blockchains and provides validator services. Everstake works with almost all major blockchain projects using the Proof-of-Stake mechanism: Ethereum (ETH), Chainlink (LINK), Cosmos (ATOM), Tezos (XTZ), Near Protocol (NEAR), Band Protocol (BAND), Elrond (EGLD) and many others.

The Everstake development team strives to simplify the delegation process for token holders and provide convenient services for staking monitoring. Newbies will find useful guides in different languages ​​on the Everstake blog that will help them figure out how to stake certain tokens in various crypto wallets.

Subscribe to the blog by Everstake and our social networks, where we regularly publish useful information: platform reviews, updates and guides.