NFT has become the new mainstream after the sensational decentralized finance movement (DeFi). However, despite the rapid growth of this sector, the problems remain the same. Many non-fungible tokens are created on the Ethereum blockchain, which is impractical for most users due to high fees that can exceed hundreds of dollars.

In this article, we will analyze what an NFT is, how non-fungible tokens are used, what they are for, what stage they are at now and what awaits them in the future.

Non-Fungible Tokens (NFT) are digital crypto assets that represent a unique virtual or real items, such as music tracks, art objects, or sports trading cards. That is why NFTs are called non-fungible tokens: they cannot be replaced with any other digital asset, so a single token can be valued at hundreds of thousands or even millions of dollars.

The NFT market began to gain traction in 2020 following the hype around DeFi although the first platforms on which any user can create independently or buy non-fungible tokens appeared back in 2017 when few people knew about these tokens. Here are popular NFT platforms:

What is the difference between Fungible and Non-Fungible tokens

Fungibility means that you can exchange one asset for another without sacrificing its value. Therefore, you can easily exchange one digital token for another. For example, if you borrow $100 from a friend in one banknote, then you do not need to repay the debt in the same way. You can, for example, pay them back with two $50 bills or ten $10 bills. This is what interchangeability is all about.

However, this will not work with NFT tokens: they are indivisible. You cannot sell just one piece of it. Therefore, the NFT token is purchased in its entirety and you cannot replace it with another token. If you borrow, say, one painting, then you will not be able to return another - it is irreplaceable.

By their very nature, cryptocurrencies do not represent real value: their price is not tied to anything and is not backed by anything. Rather, they function as a more advanced alternative to fiat currencies and traditional assets, which are subject to issuers, regulators and are centralized in nature. Despite this, they are getting closer and closer to mass adoption.

The situation is different with NFT tokens: they represent real assets that exist in digital form. Their value depends on the demand and uniqueness of the author's work, whether it be an art object or intellectual property. But, as with all markets, there can be an uncontrollable rush, due to which items will be greatly overpriced, making it difficult to estimate the real value.

How Near Protocol contributed to the development of NFTs

Near Protocol is a high-performance and scalable blockchain platform designed to simplify and accelerate the development of efficient decentralized applications (dApps). The platform is built on its own blockchain. We discussed the Near Protocol platform in our Everstake blog. If you still don't know what it is, read our article:

Currently, 7 decentralized platforms have been created on the Near blockchain for the exchange of non-fungible tokens. Near Protocol is hundreds of times faster than Ethereum, and transactions cost less than a cent, making it a more suitable platform for issuing and selling NFTs. 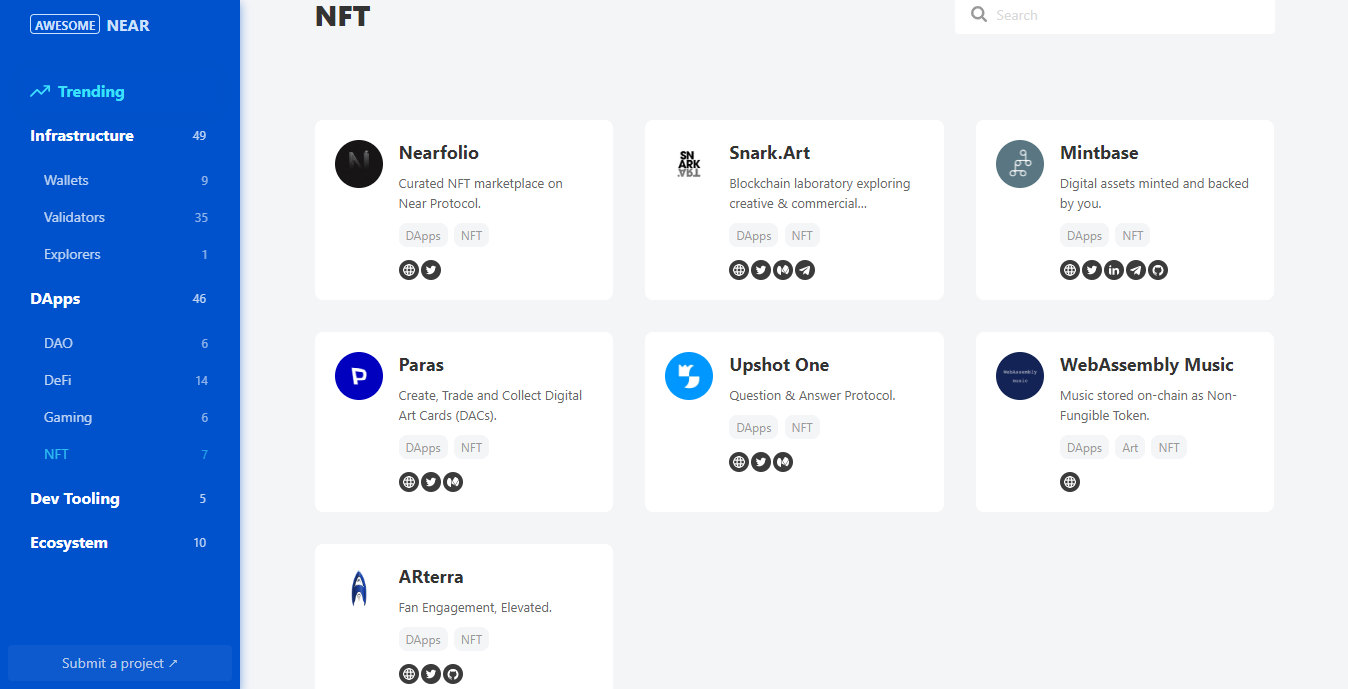 We will not describe each platform in detail, but we will tell you about the most popular and interesting projects on the Near Protocol blockchain - these are Paras and Mintbase.

Paras is an all-in-one digital art cards (DAC) marketplace. Artists can create and produce their own unique art cards, and collectors can buy them and build their own collections.

The cards are sold in an online auction format. Now there are more than a hundred different lots on the Paras website. Cards are sold both individually and in whole collections. The complete collection will be more valuable in the future than cards from it bought separately. 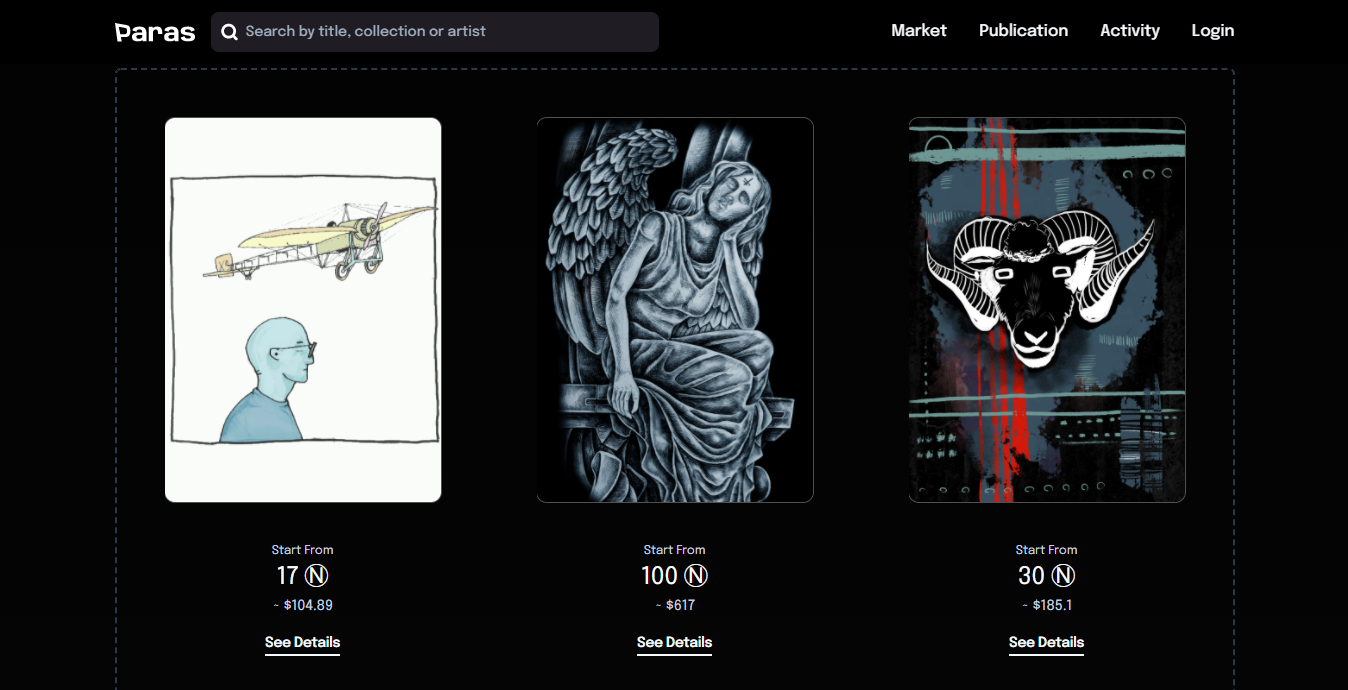 Mintbase is another digital blockchain platform for issuing and exchanging non-fungible tokens. But the tokens issued on Mintbase are different from most tokens, which are most often digital art objects. Mintbase allows companies to issue their own Programmable Reward Tokens based on the ERC-721 standard called Things.

These tokens allow companies to create their own reward system for their customers. Initially, the platform supported the Ethereum blockchain, but now users can test the platform on the Near Protocol blockchain. Unlike the previous Paras platform, there are several categories of tokens available on Mintbase. 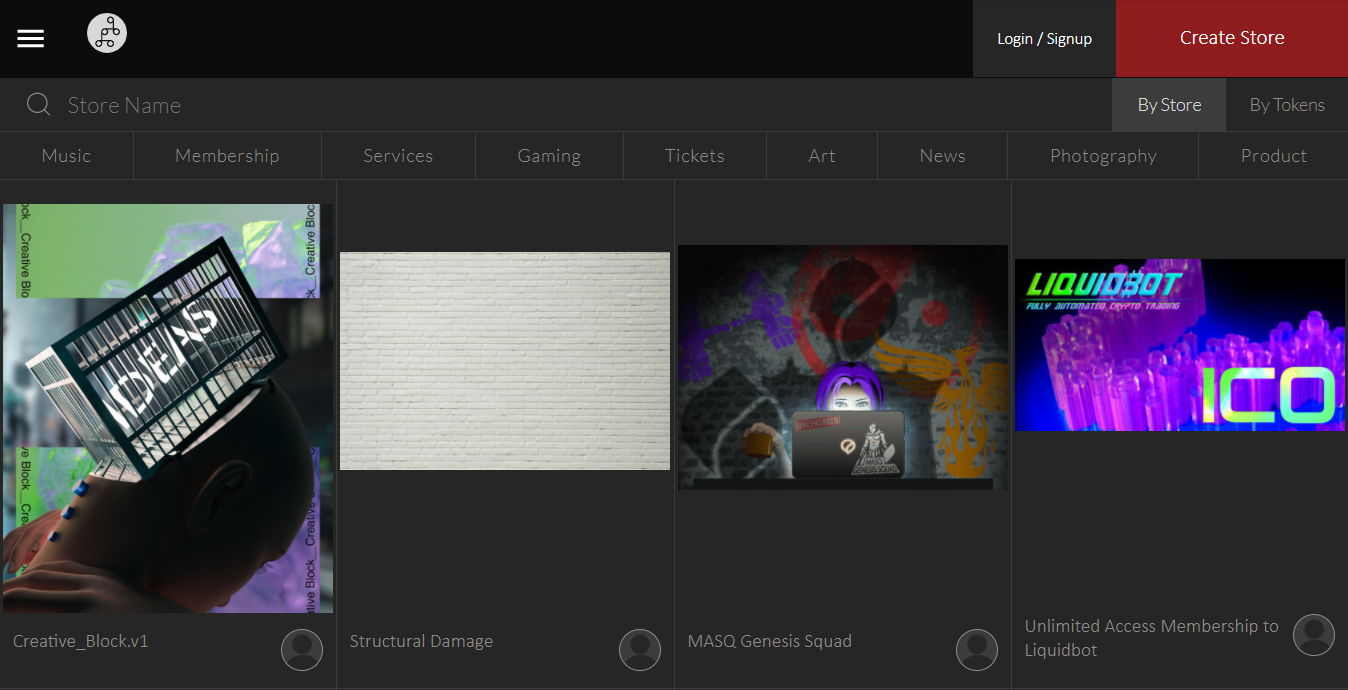 Each user can create their own store on Mintbase, create an event, and issue NFTs that represent tickets to that event. Moreover, these tickets could have additional value in the future. How much do you think tickets to the first Bitcoin meetup would cost now?

Rare and unique items can be very expensive. Take paintings by famous artists, some of which are now worth millions of dollars, as an example. Of course, most art objects remain undervalued for many reasons, but some of them become rarities over time and appreciate in value. In essence, NFT is the future of the digital collectibles market that is just beginning to evolve. Just imagine, Twitter creator Jack Dorsey’s very first tweet was estimated at $2.5 million! And it was not even the tweet itself, but only a screenshot of it! In the long term, NFT tokens can surpass well-known works of art in value.

Subscribe to Everstake social networks and stay up to date with the latest events in the blockchain world!