Neo is a smart contract network and one of the oldest cryptocurrencies, having been established back in 2014. Neo describes itself as an open decentralized network for the future smart economy, and what makes Neo especially unique to other blockchains is it’s vast array of features and capabilities, namely in the area of native infrastructure.

NEO N3 Improves On Neo Legacy In Every Way

After 4 years of Mainnet operation, the Neo blockchain underwent its biggest upgrade to date, NEO 3.0. This massive upgrade, also known as N3, brings a host of features, and in fact, the changes to the architecture were so drastic that upgrading the blockchain in a normal way wouldn’t work. So the Neo team decided to create a whole new blockchain, called N3, and subsequently migrated all the assets and apps over. It has even been noted that this migration is the largest asset migration in history. With that in mind, if you haven't yet migrated from Neo Legacy to Neo N3, check out our migration and voting guide. Migrating is critical to accessing benefits such as receiving dApp upgrades, as well as voting on the direction of the network and receiving rewards.

There is a vast list of improvements over legacy Neo, and a few key ones include:

These are just some of the features of N3, and what makes Neo N3 so powerful is that all of these features are natively available, so using outside blockchains to perform these functions is not necessary.

Critical to the decentralization, security, and functionality of the network, governance on N3 works in 4 main stages as follows:

In order to participate in governance on the network, NEO token holders need to vote in a Neo Council to manage the Neo blockchain. As such, each 1 NEO token represents 1 vote. NEO tokens are not divisible and you can think of these votes as your stake.

In this second stage the votes are tallied up, in order to decide who the top Council Candidates are.

Generally speaking, the Neo Council, which consists of the above-mentioned council members and consensus nodes, provide services such as maintaining the blockchain, electing oracle nodes, ensuring that new blocks are produced, and adjusting any critical blockchain parameters to keep the network functioning and secure.

As a NEO token holder, not only is voting extremely important as it helps safeguard the network and steer its growth in a decentralized way, it also gives you access to rewards in the form of GAS.

How Rewards Are Calculated

The reward for participating in Neo consensus comes in the form of the GAS token, which is distributed to both Neo voters and council members. This reward amount depends on the number of votes a candidate has and whether a candidate is currently a council node or consensus node.

For starters 5 GAS tokens are minted every new block, and voting takes place every 21 blocks - also known as an epoch. 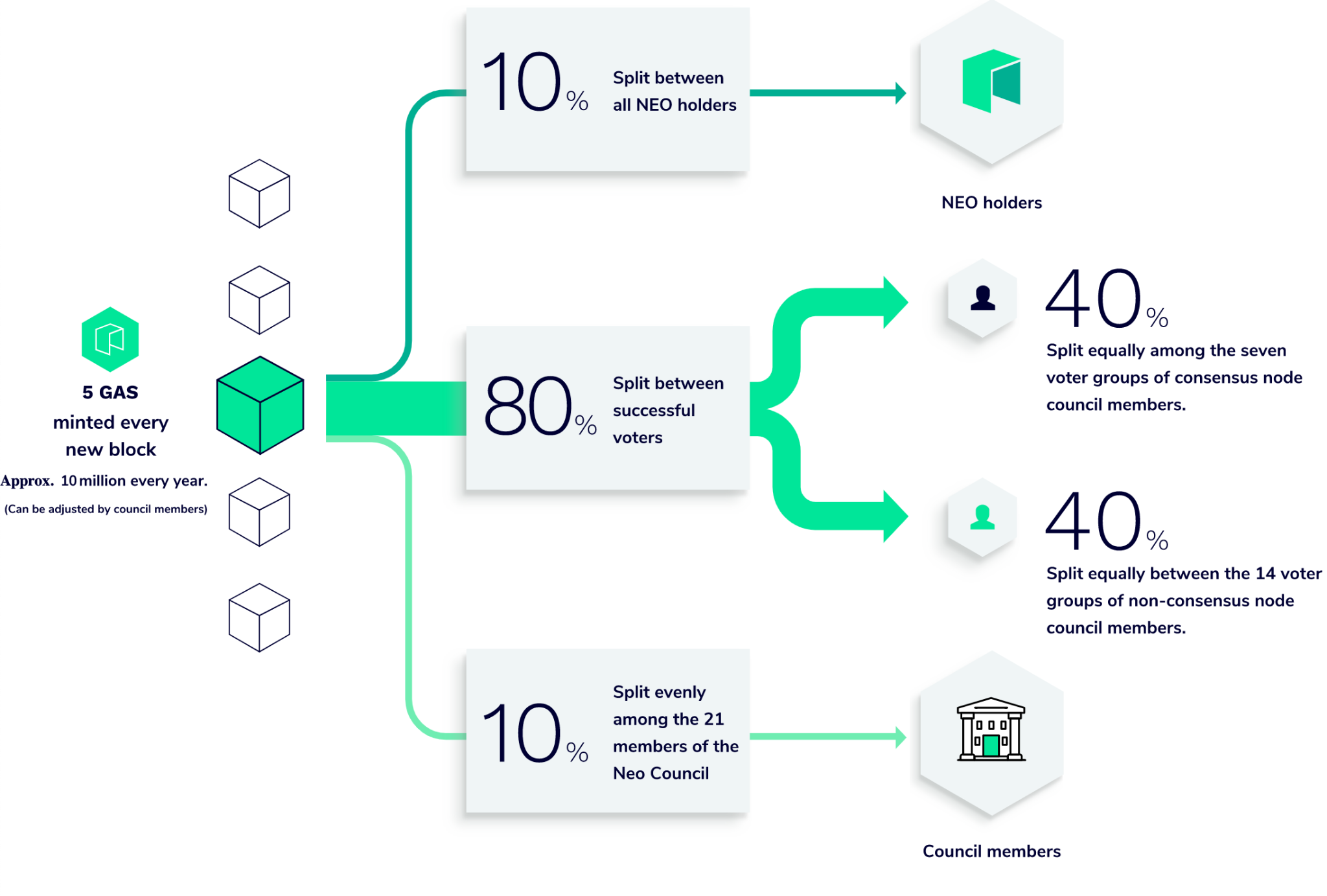 Of the available GAS rewards, 10% are split between all NEO token holders regardless of whether they voted for a council candidate, and another 10% is evenly split between council members.

If you vote for one of the top 21 nodes, then you share in 80% of the consensus and non-consensus voter group rewards.

Migrate Your Tokens and Vote To Earn More Rewards

Voting on NEO N3 is hugely beneficial as it allows you to earn much more GAS token rewards, than if you simply let your NEO tokens sit in your wallet. That said, it’s really important to note that, although the legacy Neo blockchain remains active, you can only vote and get these increased rewards if you first migrate your legacy NEO tokens to NEO N3 tokens.

Remember, that if you haven't yet migrated your tokens to the new N3 version of the network, you can use our Migration & Voting Guide.

Here’s How Much GAS Rewards You Earn By Voting

When you vote, you receive much more GAS, than if you don’t vote and simply hold NEO in your wallet.

You may use a tool like the one found at https://everstake.one/neo to see what you could potentially earn in rewards based on how many NEO tokens you hold. Here’s a quick example (estimated):

In addition to these reward benefits of voting, all Legacy dApps are migrating to the N3 blockchain, all new apps will be launched on N3, and Neo Legacy will no longer receive future updates. So migrating your tokens is highly encouraged so that you actively participate in the network and benefit from it.

How to Vote on N3 and Get Rewards

Everstake is an active Neo Council member and you could earn more rewards by voting for Everstake.

The voting process is easy and takes just 10 minutes.

Step 1: Connect your Neo wallet which supports Neo N3 on the Governance page.

And to get more information or help with voting, or if you have any other questions about Everstake or Neo N3, please reach out using our contacts and socials.