Proof of Stake is the second oldest implemented consensus protocol for blockchains. Naturally, lots of distributed networks are built using it. Once Ethereum finishes the planned transition from Proof of Work to Proof of Stake, possibly, within a month or two, it will become the largest used consensus by the market cap. Currently, the top 100 PoS coins have a combined market cap of over $15 billion, and it seems to be the only growing market at the moment. 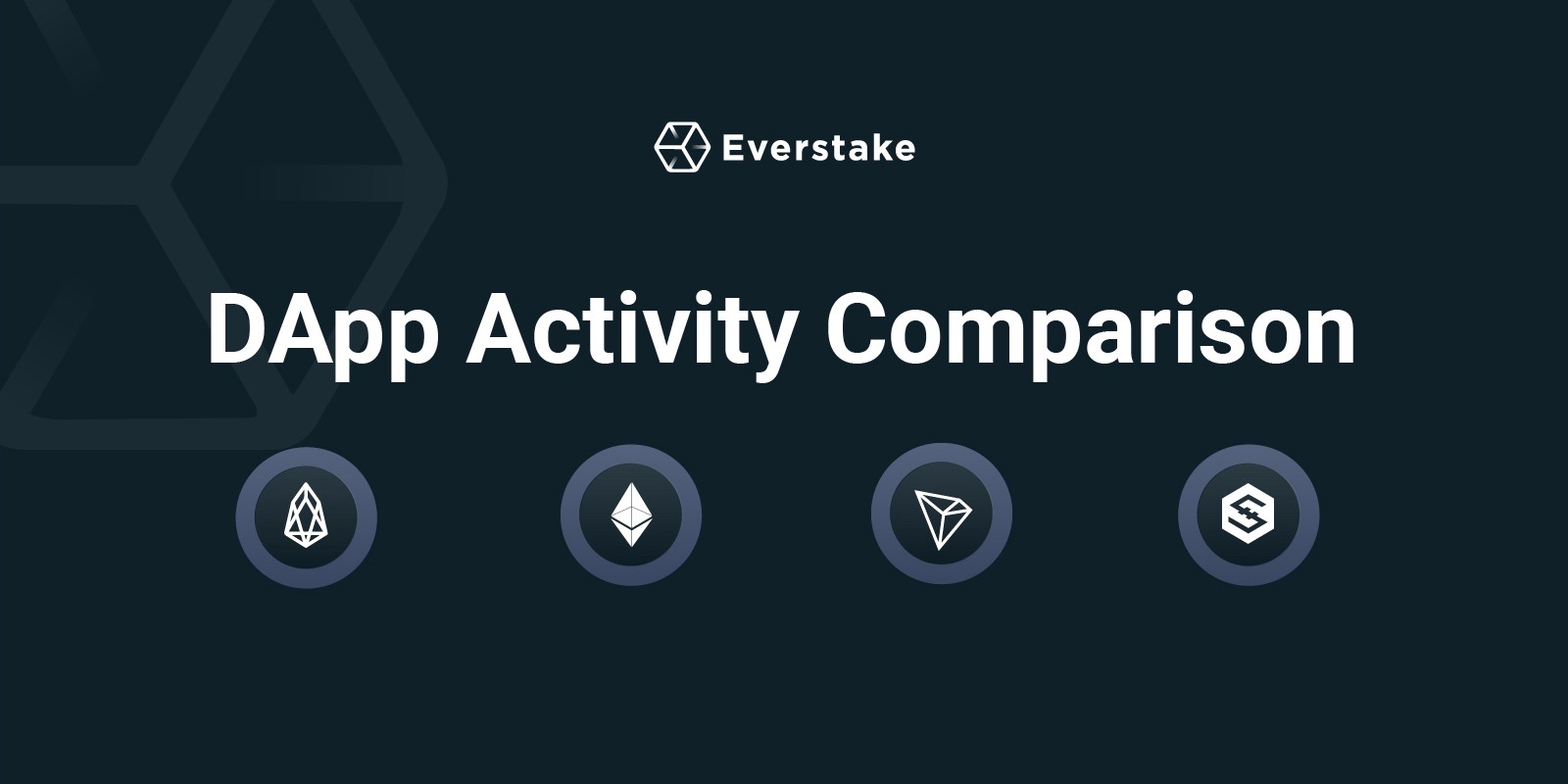 The Delegated Proof of Stake, a much-improved consensus protocol, has gained rapid popularity lately, and already has a combined sector market cap of more than $12 billion.

Once the Ethereum transition is over, PoS and DPoS coins will collect almost $60 billion in total estimated value.

One of the major distinctive features of modern PoS and DPoS blockchains is the ability to run complex dApps, the presence of sophisticated smart contract infrastructure, and the overall usability of such a functionality. Currently, IOST, TRON, EOS, and ETH are the most advanced blockchains in terms of computation support, and they all have sufficient infrastructure to run fully-pledged dApps that are easy-to-use by an average person.

Currently, EOS is the most popular blockchain for dApps in terms of daily usage, seeing over 65,000 active users each day. It is followed by the pioneer of distributed computing in blockchain, Ethereum, with just under 19,000 daily active users. TRON currently has about 15,000 unique addresses transacting with dApps each day, with rare spikes of up to 35,000 users. Finally, IOST, the relatively new player on the market, has already surpassed the 17,000 user mark. 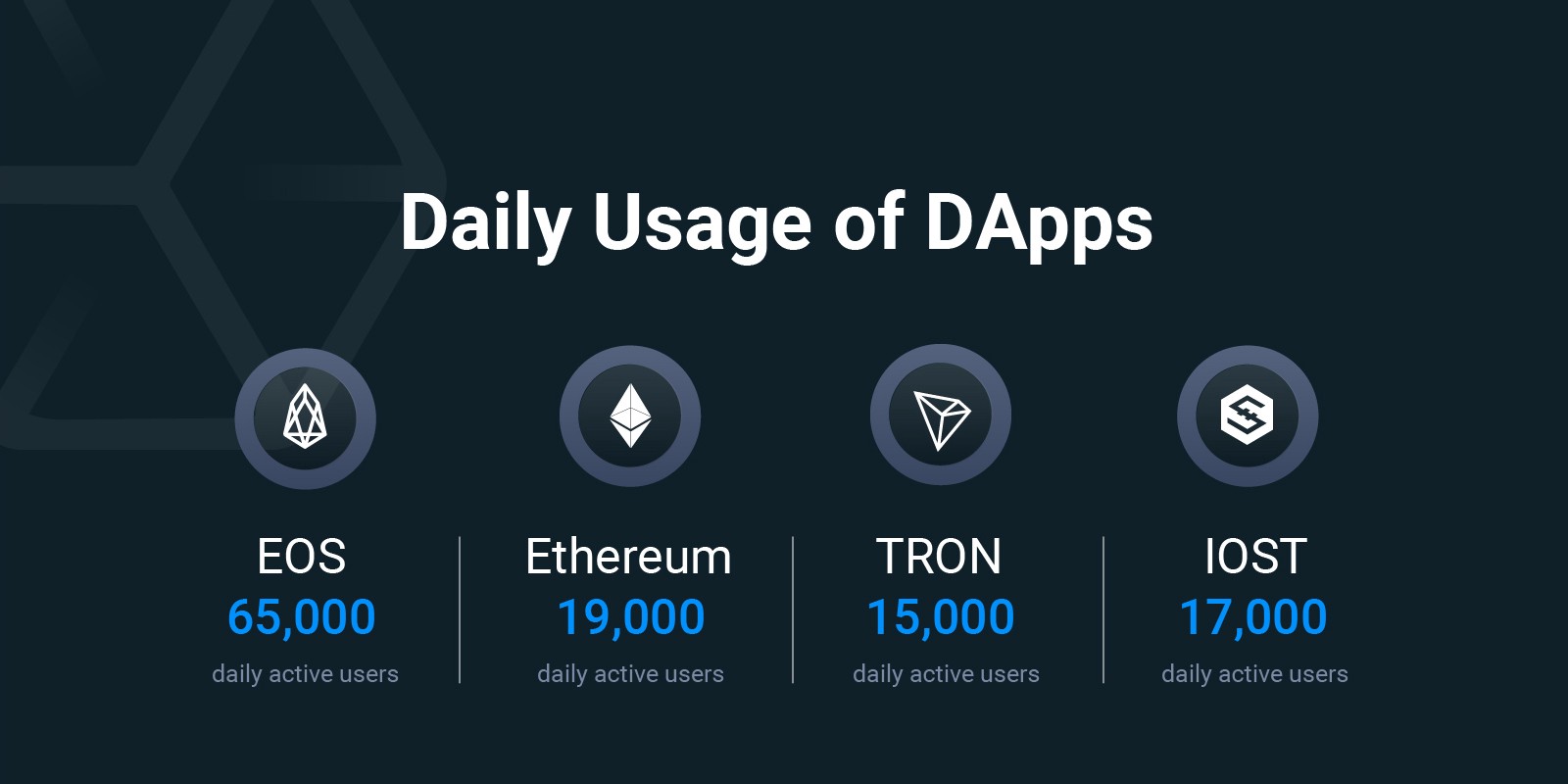 These numbers suggest that the dApp developers quickly embraced the first attempts to build a fast and light blockchain capable of running smart contracts, and the heaviest user base is still devoted to EOS. However, the newer competitors are gaining their user masses comparably quickly to hold to the promise of delivering a truly fast blockchain.

Considering that not every smart contract is a dApp per se, and not every dApp comprises only one smart contract, it’s important to note that the numbers provided below are rather approximate. In practice, all available outlets add new dApps to their stats only by the developers’ request, so some statistics websites may lack a few dApps. Nevertheless, even the estimated numbers show the frame of dApps utilization over all four blockchains. 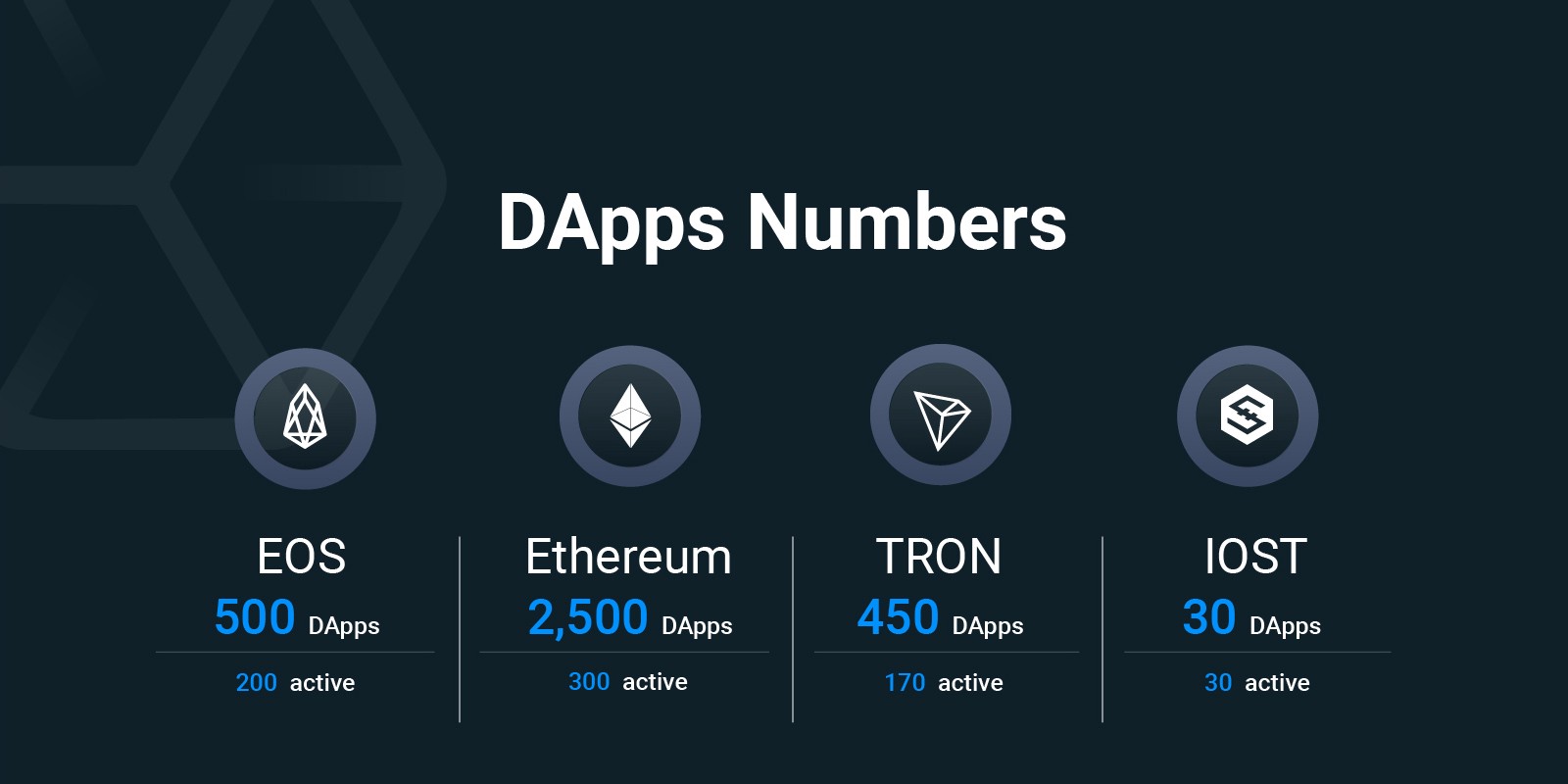 Naturally, Ethereum shows the highest number of dApps available, approximately 2,500, but due to its pioneer nature, this number includes the first attempts of developers into dApps, earlier test versions, and some obsolete software. According to the different analytics providers, the amount of truly active Ethereum-based dApps is at just over 300.

EOS has almost 500 dApps, of which, as an estimation, less than 200 are active. The situation is similar to TRON: ~450 dApps, including approximately 170 active ones.

IOST shows a different result: although it has only less than 30 dApps, almost all of them are constantly in use. It suggests that IOST delivers the promise of a high-speed smart blockchain, and all applications that are already developed for it, provide a great user experience.

Currently, the developers belong to two subcategories. Those who transit old software and approaches, usually develop their own products in-house. These dApps in the majority are games, gambling applications, and exchanges. Companies just develop and deploy a product, and collect their commissions for profits.

On the other hand, there are a lot of dApp development companies that provide services utilizing any blockchain, to the customers’ choice. Thanks to the high level of the smart contract programming languages and blockchain ports of other popular languages, the entry level is low, so the developers can easily build projects for virtually any blockchain.

This fact heavily contributes to the rise of dApps on new blockchains, as they are quite easy to migrate from one blockchain to another. This said, 5 of the top 10 non-blockchain-specific dApps on IOST are migrated from other blockchains, with noticeable results. For example, the migration of Endless Game from EOS to IOST was so successful, that the younger IOST version has 20 times bigger weekly gaming volume. Another game, EOSWIN, became completely stall after migration to IOST and becoming IOSTWIN.

Mango is almost inoperable on TRON and Ethereum, whereas it is one of the major gambling dApps on both EOS and IOST, with IOST quickly catching up in numbers.

Support In The DApp Developer Community

Since Ethereum has been around for a longer time, it has the biggest developer community and the number of documents found online. Newer blockchains keep closer contact with the developers to contribute to the community. Also, many blockchain developers have a big influence on their communities, assist with any issues, and keep an eye on the feedback in case any improvements are required.

The community itself is very enthusiastic about new platforms, technologies, and blockchains, and often share their own tools with others, port utilities, tools and guides to new blockchains and smart contract programming languages. For example, Attic Lab has been a major contributor in the EOS infrastructure since its full start, and developed web and mobile wallets, several plugins for Munin, shared their own EOS performance and search tools and published a plethora of educational materials.

The community also often gets support from the platform developers. For example, IOST foundation helps developers to attract users to new dApps and also provides assistance with resources. After the start of IOST, Attic Lab quickly became an IOST block producer and plans to support the IOST community in the same manner.

The ability of the blockchain to support Turing-compatible executable code was just an additional feature in the beginning, but quickly became a crucial factor in the progress of blockchain technology. New platforms gravitate towards decentralized computing and data processing, instead of simply payments, and new requirements arise.

The industry’s need to have an ultra-fast, very powerful and capable blockchain urged the development of new platforms, that improve over each other with a staggering pace. Only two years ago, EOS seemed to be the go-to choice for dApp developers, but the current situation shows that new, better, faster, lighter platforms like IOST are capable of delivering the promise.